The Republic of Macedonia has earned the reputation as the hidden gem of the Balkan Peninsula, featuring some of the most fascinating destinations that are highly overlooked and understated, due to poor marketing. Apart from its diverse landscape, beautiful lakes and rich culture and tradition, Macedonia is home to number of ancient historical ruins and a total of 4 UNESCO World Heritage sites. If you’re planning on visiting Macedonia somewhere in the near future, you can’t miss out on visiting the following historic sites, which date back from both the medieval and ancient Greek period. 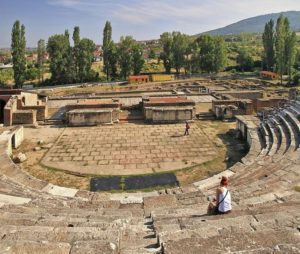 Heraclea Lyncestis
Perhaps one of the most well preserved ruins in the land of Macedonia is the ancient city of Heraclea Lyncestis, located just two kilometers from the city of Bitola. The name of the city derives from the ancient divine hero of Greek mythology, Hercules and the city was founded by the great Macedonian King Phillip II in 4th century AD. The city was established on the important trade route of Via Egnatia, which resulted in the fast prosperity of the city. Today tourist have a chance to admire the remains of the buildings, temples, columns and mosaics which once stood tall in the ancient Kingdom of Macedonia.

Samuel Fortress
Located on the hillside in the city of Ohrid is the largest preserved fortification in Macedonia, Samoilovata Tvrdina or otherwise known as The Samuel’s Fortress. The fortress is one of the most popular tourist destinations in the city, with its walls reaching 16 meters high at its highest point and stretching for more than 3km in length. In recent time archaeologist uncovered new remains of ruins grounds which date back to the 3th century BC, many believing that it was actually built by King Phillip II. However during the course of history the fortress was destroyed and rebuilt several times, until receiving its final and present form, which dates back to Tsar Samoil in the late 14th century. Visitors can see this medieval marvel at any time of the year and there is not ticket for entrance.

The Aqueduct in Skopje
The Aqueducts were huge structures built in Roman times with a sole purpose of bringing water into large Roman settlements. The Aqueduct is located just 2km out of Skopje and its one of the most well preserved pieces of Roman engineering in the entire Balkan region, although it’s unclear to archaeologist when the aqueduct was actually built, few theorist suggest that it was built during the 1st century in order to provide water for the ancient city of Scupi.

Ruins of Stobi
Presumably the most popular archaeological site in Macedonia, are the ancient ruins of Stobi, once the capital of the ancient kingdom of Paeonia. The city was later conquered by the Macedonian armies and furthermore became a Roman colony until the late 6th century. The city of Stobi was founded on one of the busiest trade routes and today the ancient ruins uncover the luxury wealth which the city possessed. Stobi is definitely one of those sites you would not want to miss out on, as the grounds lay waste to ruins such as roman theaters, basilicas, swimming pools, temples, fountains all decorated with marbles, mosaics and elegant murals, portraying the immense wealth of this ancient city.